Praised for their “intelligence” and “immensely satisfying playing” by the New York Times, the Amernet String Quartet has garnered recognition as one of today’s exceptional string quartets and is Ensemble-in-Residence at Florida International University in Miami. Their sound has been called “complex” but with an “old world flavor.” Strad Magazine described the Amernet as “…a group of exceptional technical ability.” The Amernet have collaborated with many of today’s most prominent artists and ensembles including the Tokyo and Ying quartets as well as Shmuel Ashkenasi, Robert deMaine, Roberto Diaz, Gary Hoffman, and Ida Kavafian. Earlier in their career, the Amernet won the gold medal at the Tokyo International Music Competition before being named first prize winners of the prestigious Banff International String Quartet Competition.

KASA Quartet, First Prize winner of the 2017 Coltman Chamber Music Competition, was founded in the summer of 2016 by Andy Liang, Aaron Schwartz, Stephanie Price-Wong and Kyle Price. KASA utilizes its fluency in multiple styles to curate fresh, innovative, genre-defying performances that harken the classical standard repertoire and fuse it with favorites of the jazz, musical theater, folk and pop standards. The quartet takes pride in creating and interpreting original arrangements and transcriptions of works by Jacob Collier, Marvin Hamlisch, George Gershwin among others. 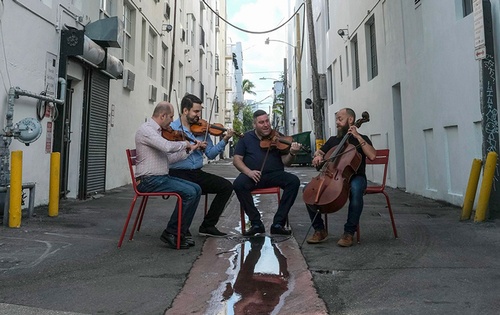