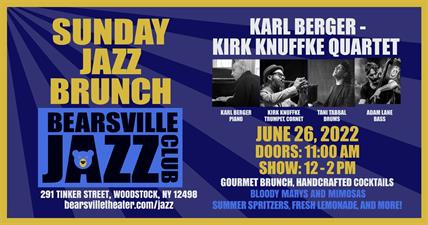 We do ask for a small cover charge. Too often, local musicians are paid poorly (or not at all and expected to work for tips). We are leading the fight to pay for musicians a decent amount for their contribution. Respect our Musicians and Keep Music Alive!

Karl Berger played piano in Germany when he was ten and worked in his teens at a club in Heidelberg. He learned modern jazz from visiting American musicians, such as Don Ellis and Leo Wright. During the 1960s, he started playing vibraphone and received a doctoral degree in musicology. He worked as a member of Don Cherry's band in Paris.  When the band went to New York City to record Symphony for Improvisers, he recorded his debut album as a leader.

With Ornette Coleman and Ingrid Sertso, he founded the Creative Music Studio in Woodstock, New York, in 1972, to encourage students to pursue their own ideas about music. Berger considered Coleman his friend and mentor, and like Coleman he was drawn to avant-garde jazz, free jazz, and free improvisation.

Originally from Colorado,  Karl Knuffke was self-taught on the trumpet and cornet, later benefiting from the private tutelage of Ornette Coleman, Art Lande and Ron Miles. Knuffke began playing with Butch Morris after moving to New York City in 2005. This friendship resulted in four recordings and several European tours. In 2009, he joined the Matt Wilson Quartet, recording Gathering Call featuring John Medeski. Knuffke’s flair for “balancing sly groove and meditative exploration,” in the words of Time Out New York, has been underscored via collaborations with such sage musicians as Roswell Rudd, Marshall Allen, Tootie Heath, Frank Kimbrough, William Parker, Myra Melford, Steve Swell and Billy Hart.

Knuffke performs with Allison Miller’s Boom Tic Boom and in Sifter with Mary Halvorson and Matt Wilson, as well as groups led by Charlie Hunter, Ben Allison, Ray Anderson, Bill Goodwin, Karl Berger, Ted Brown and Michael Bisio. In 2015, Knuffke won the “Rising Star” category in the DownBeat Critics Poll. His album Arms & Hands, released by the label Royal Potato Family in 2015, earned wide acclaim, with The New York Times saying: “Cornetist Kirk Knuffke harbors a dual commitment to formal experimentation and bedrock tradition: There’s no either-or. Still, it’s not often that you encounter the harmony of forces found on Arms & Hands, his excellent new album.” The 2017 album Cherryco (Steeplechase) saw Knuffke interpret tunes associated with Don Cherry alongside bassist Jay Anderson and drummer Adam Nussbaum; it was hailed on both sides of the Atlantic, Jazzwise and NPR. NPR picked it as Jazz Record of the Year.

In 2020, Knuffke released two albums: Tight Like This (Steeplechase), featuring tuba player Bob Stewart and drummer Kenny Wollesen; and Brightness: Live in Amsterdam (Royal Potato Family), with bassist Mark Helias and drummer Bill Goodwin. Knuffke is also a recipient of the Jerome Foundation Composers grant. Dusted has said: “Knuffke isn’t the least bit reticent about following his restless muse wherever it leads him. The result is a ballooning body of work that is at once prolific, invitingly diverse and, perhaps most dependably, far from predictable.”